BUT, the good news is that there is another option here. The Attorney General can file a group discharge application which would cover all students who attended for-profits like Corinthian, ITT Tech, AI and other schools. Unlike an individual DTR, we do have a way to force them to respond to these group wide DTRs. Two other states have already done this, Massecuttes and Illinois. In a recent court case the judge ruled that the Department of Education cannot ignore these group DTRs in the same way that they are ignoring individual DTRs.

So what we want to do is organize everyone in Michigan who has attended one of these schools to email the Attorney General’s office and tell them to file a group wide DTR. We’ve created a template of for you to follow below.

After you add your story send it to the Michigan Attorney General here: miag@michigan.gov
BCC thomas@debtcollective.org so that we can keep track of how many people have sent letters.

The main person we need to work with in the MI AG office is named David Knezek, he is in charge of legislative affairs.

[YOUR NAME]
[YOUR ADDRESS/EMAIL/PHONE]

I am a constituent and a former student of a predatory for-profit college. I am writing to ask you to file what is known as a group discharge application under the 2016 regulations of the Borrower Defense to Repayment law. This would help people like me and many others in Michigan who have been defrauded by a predatory for-profit school. Other states Attorneys General like Massachusetts and Illinois have already taken this step.

I have already filed an individual Borrower Defense to Repayment, but the Department of Education so far has refused to make a decision on this claim. Their strategy seems to be to ignore these claims long enough until they can rewrite the rules in 2020 and then deny these claims. Given the potential harm facing all former for-profit borrowers and DeVos’s longstanding hostility towards student debtors, I believe a new approach is needed.

I attended [NAME OF SCHOOL] in [CITY] from [YEARS ATTENDED]. I am writing to tell you my story of being preyed on and scammed by my school.

I am now organizing with other defrauded borrowers as part of the Debt Collective, a membership organization for people in debt. I am writing in the hope that you will take action to ensure that my federal student loans, as well as the loans of every person in our state who was scammed by a for-profit school, are canceled. For the last two years, Betsy DeVos has refused to cancel predatory loans even though the law requires that she do so. As the top law enforcement officer in Michigan, I am confident that you will do all you can to help by filing a group discharge application.

I look forward to hearing from you and learning more about how I and other members of the Debt Collective can support you in advancing the cause for debt relief.

So obviously this would need to be printed out and snail mailed to them?

No, you can email it to them here: miag@michigan.gov

If you prefer to snail mail it go ahead.

Sweet, I am all about email!!! LOL
It has been emailed to them. Hopefully we get somewhere. Last time I contacted the DOE, they said they had no record of my DTR ever being submitted.,

Good job everyone! I just got a call from the Michigan AG office. It is very clear that they are absolutely getting bombarded with emails about this. Great job @Robbie_Tribble for mobilizing people.

Just a heads up, sent mine a few minutes ago. On to the next action!

I am Erica Maupin in Michigan and I will be sending an email to the AG here in Michigan using the template as well as printing and mailing a copy as well.

We got a response after a month. 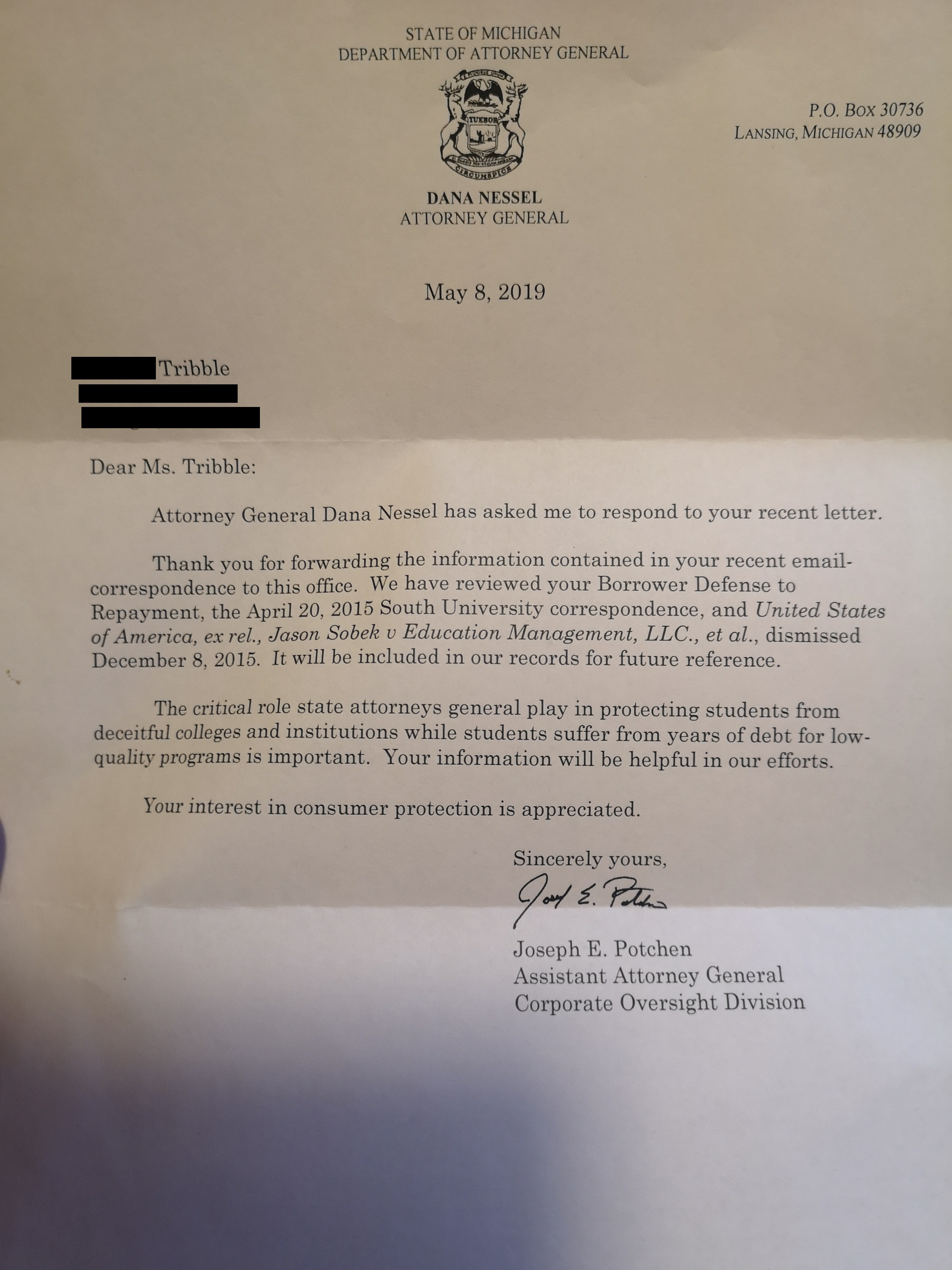 That is it! ‘Thank you for giving us information and we will add it to the file?’

I am glad you got a response and that they acknowledge your helping them. It is concerning that they have nothing actionary to say from their end.

I am unable to send my email as the email address is invalid. So I printed my email and will attempt to send via snail mail.

Huh… I wonder why it’s not working? I sent mine to that email…

@EricaM
Did you try this address?

I was finally able to get it sent. I had entered the address in wrong. I noticed it was entered wrong when I compared what I had and what was posted. When do much is on my mind and happening around me. I also did snail mail.

My response from AG Nessel was great, will try to find the letter today and upload! It was very encouraging!!!