What will happen going forward

I’m not entirely coming to terms with this psychologically, the mountain of debt. Bernie dropping out was a huge blow for many reasons, this included. I feel absolutely hopeless about what will happen to us politically, which I’m sure is how these type of companies want us to feel. Does anyone know if there is any hope for political reform with either Biden… nope can’t say the other one’s name.

I really wish I could say you’re wrong, but you aren’t’. you are right on the money (i couldn’t avoid that pun, sorry…). It took Bernie 8 years of campaigning and years of groundwork prior to that to get the issues on the national debate stage. Now that Biden is the nominee-who we will all have to vote for to oust the racist-corporatist-mobster in the WH-we cannot expect that anything significant will happen to revolutionize and answer the call of the people, and address their needs. Its so demoralizing to realize that millions of people worked towards this possible future and it all goes up in smoke in what must be described as another theft by the DNC. We’re literally years behind now, forced to support a guy who told billionaires “Essentially, nothing is gonna change”. Ugh/

As I watched Bernie Sanders inform the public that he was ending his campaign run for President of the United States. I was literally thinking the same thing, “What will happen to Forgiving all Student Loan Debts and Free College for All now?” None of the other Candidates running for President are focused on the issues that Bernie Sanders used for his platform. If Senator Joe Biden wins the election, none of these issues will see the light of day. If Donald Trump wins again, then we’re really in Trouble. Trump will end the Public Service Loan Forgiveness Act, and Joe Biden probably won’t do anything to help the Student Loan Debt Crisis. With the Coronavirus crisis causing many people to be out of work and suffering financial problems. All I see in for the future is people dealing with more debt than ever, and the Government ignoring the problems people will be facing for a long time. The Trump Administration and Congress only put a Band aid on the problem by passing a bill to send out stimulus checks to taxpayers and suspending Student Loan payments for the next few months. When they think the Coronavirus crisis is under control, its back to business as usual in the White House and Capitol Hill. Collection Agencies will begin calling to collect money from people who have been out work for months. Yes I feel hopeless too, now that Bernie Sanders has dropped out of the race for President. We have to fight harder than ever to end Student Loan Debt.

This was a tough blow, but the work continues and the movement continues.

Both Biden and Trump are our enemies. The way I see it, the election in November is about choosing which enemy we want to fight against.

Direct action and civil disobedience are more important now than ever. It really sucks that Bernie didn’t win the nomination, but if there is one silver lining it is that people will realize that we can’t put our hope in any politician, no matter how good they are. We have to put our hope in ourselves and each other. It is the only way we will win.

One of the cofounders of the Debt Collective, Astra Taylor, just wrote this article about the end of Bernie’s campaign 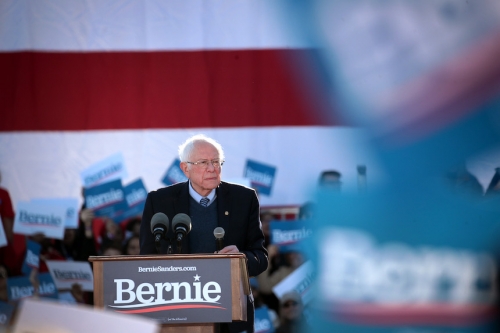 Astra Taylor: Bernie Sanders’ Exit Is an Indictment of Our Broken System—Not...

Voter suppression was stronger than Bernie Sanders' voter turnout plan. And the pandemic has made things worse.

Join the strike and spread it near and far

Hi - I’m a late responder to your message, but I share your sentiments. It did feel like Bernie’s defeat by the establishment and its ass-kissers (the entire Dem field, it turns out–so many candidates, and we end up with…uggh) was the death knell of hope for any debt relief any time in the near future.

OK, now, having said that: I want to say, “We can’t lose hope” in a way that doesn’t sound cliché. But it’s true. We have The Debt Collective, and that is a start. I’m new to TDC, but very impressed with Astra Taylor and the other founders, and the participants and contributors. It’s helpful for me to read others’ stories, though I admit, it’s painful to read them, too.

I don’t truly believe there is no Hope, just it is likely to take awhile. Placing our hope in whatever corporate mouthpiece or crackpot slithers his or her way into the Oval Office is just a recipe for extreme disappointment and disillusionment.

Thanks so much for sharing this @Magatarek319

It is going to take a struggle for sure, but I still believe that we will win full cancellation eventually.

It is hard to know how likely or unlike it will be, but Congress is currently at least discussing some form of mass student debt cancellation as a part of the next stimulus package. We need to pour our energy into organizing, both to do what we can to make sure that cancellation gets included now, and for the long term since they might not do it or might not cancel it all.

But the great depression will put enormous pressure on those in power to let go of some of this unnecessary cruelty. They can deny reality for only so long.