Really good article in the NYT about cancelling ALL student debt

What Canceling Student Debt Would Do for the Racial Wealth Gap

A solution to the debt crisis would help all borrowers. But it could also begin to address a history of discriminatory policies affecting Black graduates.

By Naomi Zewde and Darrick Hamilton

In his victory speech, Joe Biden made a promise to America’s Black community: “You’ve always had my back, and I’ll have yours.” Such a focus on racial justice is especially welcome at a time when activists have put a focus on anti-Black racism and when Black Americans are suffering disproportionately from the Covid-19 pandemic and the job losses it has created. But the sentiment needs to be backed up with prompt action.

One of the quickest ways that President Biden could begin to fulfill his promise to Black America, without needing to wait for Congress, is to cancel all federal student debt through executive action.

The president has recognized the problem that student debt poses. His administration quickly extended President Trump’s temporary pause on federal student loan interest and payments, and Mr. Biden has expressed support for a minimum of $10,000 per person in “immediate” student debt cancellation in addition to campaign promises of more substantial relief.

But only a full cancellation would help all borrowers who struggle with educational debt. It would also begin to address the added burden that a long history of discriminatory policy places on borrowers of color, and Black borrowers in particular.

The 20th-century government programs that built and supported the white middle class were explicitly exclusionary, and that helped to create a wealth gap in which the median white household has eight times the assets of the median Black family. Less wealth means that Black students, particularly Black women, take on more debt when they attempt to go to school.

The problem is compounded by employment and wage discrimination. Black families earn just 80 percent of what white families with the same education level do, and Black women earn just 63 cents on every dollar paid to white men with the same degree. So Black people need to obtain more credentials to obtain incomes equal to white people, and additional education costs them more because of the extra debt and accruing interest that lead many to struggle with repayment.

The president has the ability to drastically change the lives of more than 43 million borrowers and their families. Decades ago, Congress gave the Education Department the authority to cancel federal student loan debt administratively. President Donald Trump and Betsy DeVos, his education secretary, used this authority three separate times to suspend both payments and student loan interest, and to make 10 months of nonpayments count toward existing federal forgiveness programs, such as Public Service Loan Forgiveness.

Senators Chuck Schumer and Elizabeth Warren, seemingly recognizing the inadequacy of the $10,000 proposal they originally put forth, have urged Mr. Biden to use his authority to cancel at least $50,000 in federal student debt via executive action. Four Black female leaders in the House — Representatives Ayanna Pressley; Ilhan Omar; Alma Adams; and Maxine Waters, the House Financial Services Committee chairwoman — have introduced a companion resolution.

The $50,000 figure, while still less than the ideal, gets closer to addressing the problem: At this level, roughly 93 percent of the lowest-income Black households with student debt would experience total student debt relief. A $10,000 cancellation would leave the majority of these households still in debt.

But a full cancellation would provide the best outcome of all, and would protect young Black people who sought to use education as a tool for social mobility rather than punishing them for pursuing the very credentials they need just to obtain the income of less-educated Whites. Because Black graduates have more debt than their classmates, a full cancellation evens the playing field instead of leaving more Black graduates mired in the educational debt trap.

Because this racially discriminatory debt is largely owned by the federal government, at the rate of four out of five student debt dollars, immediate cancellation is administratively simple and explicitly allowed by law. It won’t close the racial wealth gap — that will require ambitious progressive policies to counteract the discriminatory ones that helped create it. But cancellation is one of the quickest actions the president could take to halt the gap’s growth, and even help encourage its decline.

Black Americans were targeted in the lead-up to the last economic crisis, as financial institutions gave subprime loans to Black families with the same incomes and credit scores as white families who enjoyed better loan terms. The result was a further decimation of Black wealth — with Black families losing 53 percent of their wealth (compared with only 16 percent for white families). Average student debt for Black households nearly tripled in the 12 years surrounding the 2008 recession, as many households sought to obtain more education in order to counteract these devastating losses. But anyone graduating into this pandemic-induced crisis will very likely face the same permanently lower employment and earnings prospects that those with the bad luck to graduate into the 2008 recession experienced.

Joe Biden has promised to have the back of the Black community. Widespread discrimination, which once excluded Black people not only from higher education but from basic education, coupled with other forms of exclusion and theft, has led to deeply entrenched disparities in wealth, which have led in turn to disparities in student debt. Canceling student debt via executive action is a tool the president can use immediately to make a serious dent in these inequities. To fail to use the authority he has to bring this relief to millions would be nothing less than an abandonment of his promise. 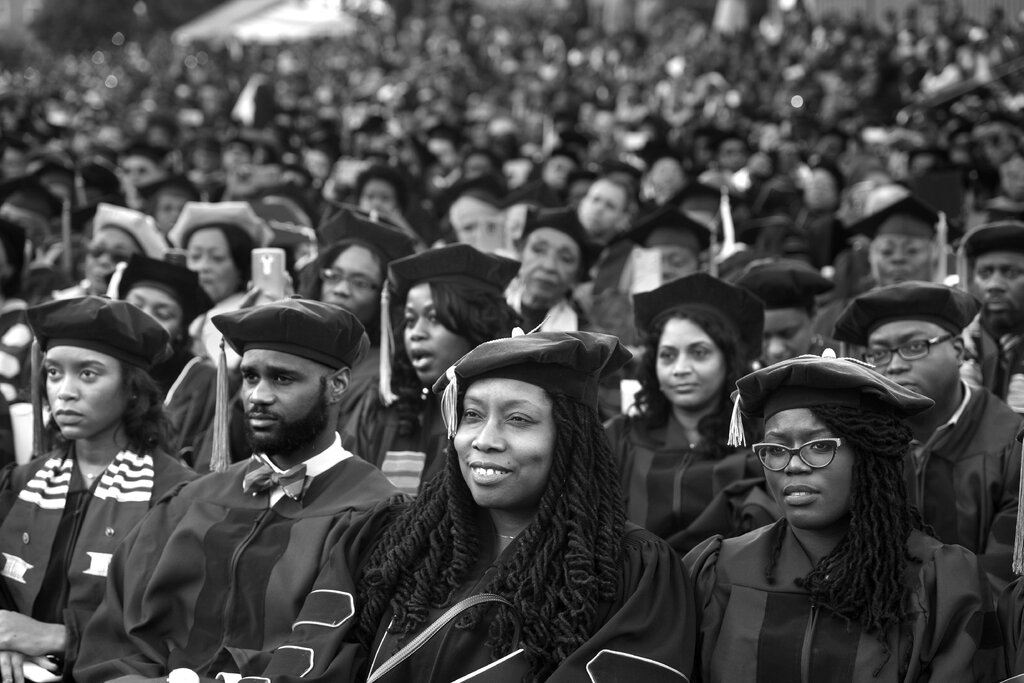 A solution to the debt crisis would help all borrowers. But it could also begin to address a history of discriminatory policies affecting Black graduates.