Thanks for your message, Amy! Do you - or others - have suggestions of how to advocate for myself?

Yes! I am a registered nurse, working for Veterans Affairs. By all rights, I should have qualified for the loan forgiveness program, but Navient told me “nope.” I’m hearing this happened frequently, which is one reason Navient is being accused of fraudulent practices. The longer they can keep students in forbearance, the more they profit on interest as well! Great world we live in. 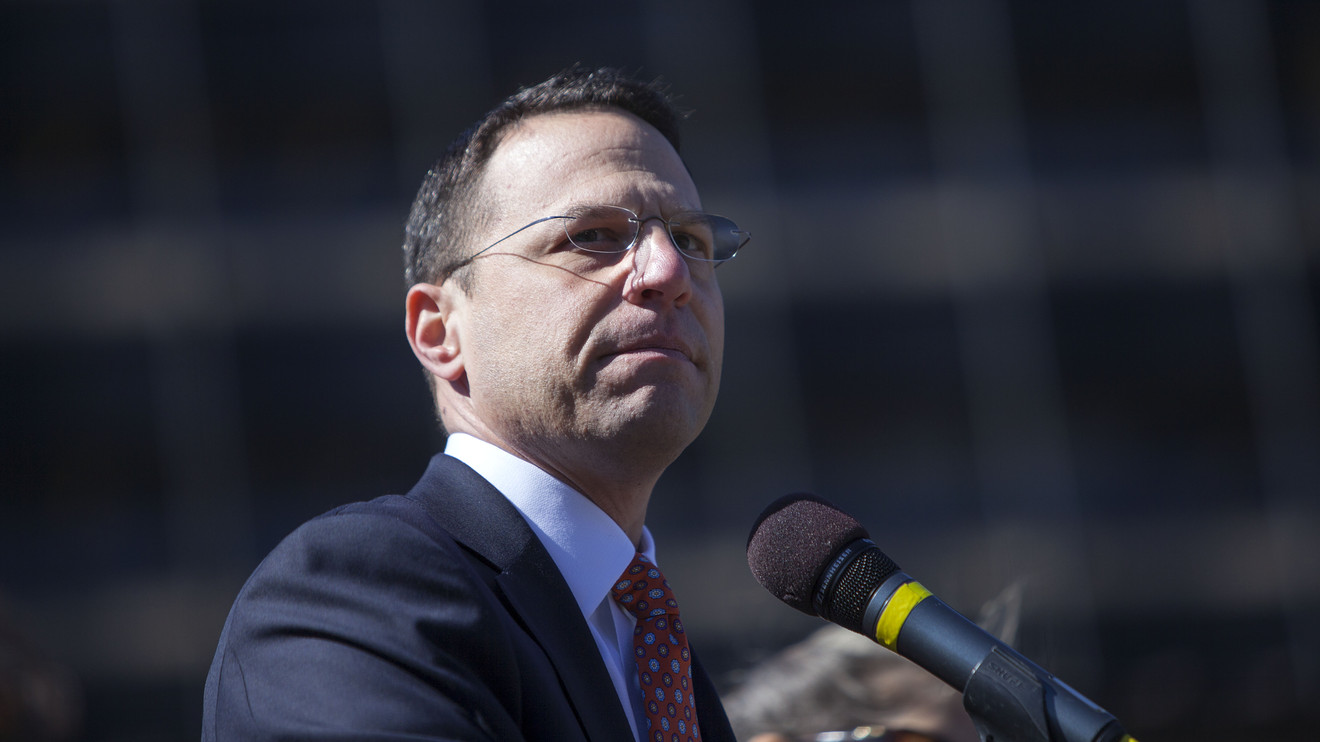 Judge weighs in on battle over states’ ability to regulate student loan companies.

Christina_James the best way you can advocate is by becoming educated (check this site often, in addition to all of the other groups on facebook and twitter) and by ADVOCACY. Reading and venting are great (We all need that!) but we also have to ACT. This means writing letters to your Attorney General, your congressmen, your NEWSPAPERS, etc. - band with other students for group actions. We have to do whatever we can to get our voices heard. That’s where you will see change.

I have 4 loans with this agency: 2 from my master degree and 2 recently taken for Ai tuitions. Because I started studying in Ai, the old loans where in hold. On December 13th, I withdrew from Ai because of several factors and in that same week FedLoan was sending me emails for the loans. I called and told them that I am in the grace period. The answer was that I consplidated my loans and those two loans cannot be applied to that period. Fine, I understood. Then, I uploaded a document of the repayment option: Pay As You Earn. I am not working anymore in PR , got married, and live in Texas. My husband is a Veteran and have several medical appointments. He is 100% disable and unemployed because of all his conditions. I completed PR’s taxes and presented the evidence of my income so my repayment options can be tabulated according to my earnings. FedLoan wrote that grace period will end on Sep (more than 6 months) and then, they will work with my account. Meanwhile , I have to pay accrued interests in the accounts. If there is a lawsuit for this, let me know. 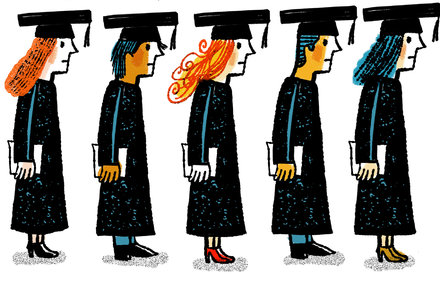 Your Student Loan Servicer Will Call You Back in a Year. Sorry.

Many public servants in the federal loan forgiveness program spot errors in the count of their qualifying payments. Their servicer tells them reviews will take a while.

What we need to do, is use this space to strategize and take action against the Department of Education. This loan repayment program was created and used to swindle countless individuals back into school, and further into debt.

I think it would be a good ideas to get on a conference call and get a sense of who are our members effected by this, where are folks located, and what ideas can start to brainstorm.

Please post back if you are interested in join a group call to discuss this specific topic.

Thanks to everyone who shared their experience. I’d definitely be up for a group call to strategize.

Here is a recent update from FSA on the TEACH Grant Reconsideration Process. I am reading this now and will come back to this space to discuss.

Can you all take some time and read up on this to. Then post back questions or thoughts? or how this might effect you? 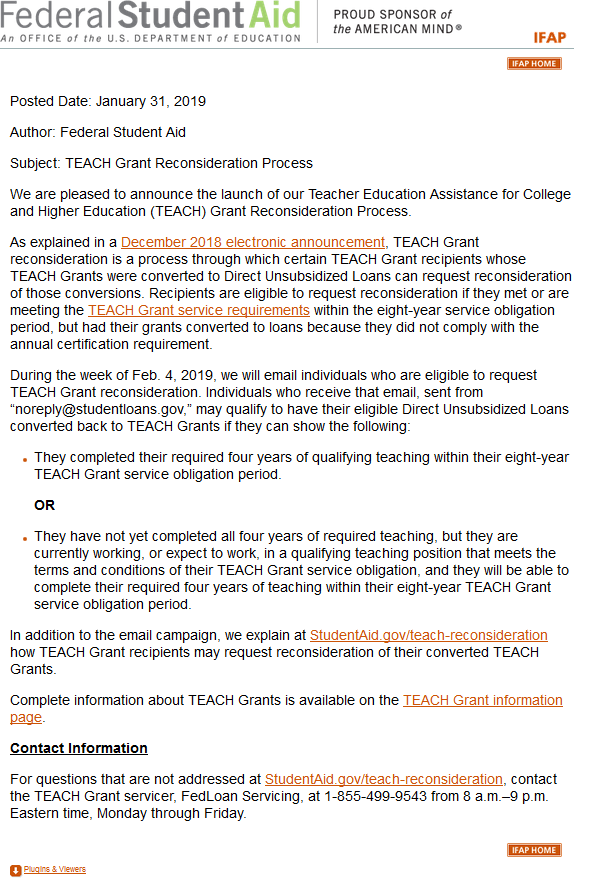 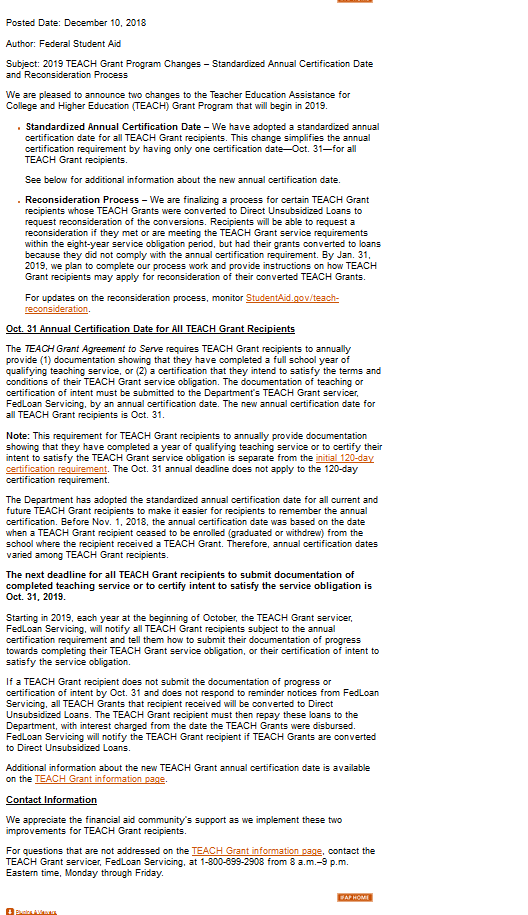 Any help in completing the bdr would be appreciated. Attended itt from 2005-2009. I don’t have any of the emails or brochures to attach. Something I read said I should refer to the lawsuits but I’m not sure how to include that information

I’m assuming you are asking about DTR?

The Department of Education is being very frustrating. On the one hand, they already have all of the info about the massive systematic lawbreaking that schools like ITT engaged in, and although they make everyone file individually, it seems like whether you get approved or not depends on one thing and one thing only, the dates you attended a particular school and what program you attended.

But now under Trump/DeVos they are simultaneously claiming that most DTRs are not legitimate because they don’t include original evidence, which is bonkers because they already have the evidence. They are just trying to have it both ways.

So #1 I wouldn’t put too much pressure on yourself to provide all the evidence. Your testimony about your own experience is evidence enough, despite DeVos’s obvious bad faith.

And #2 feel free do do a huge document dump and just attach all of the evidence we already have of abuse at ITT. You can find that all here (look under “exhibits”) Documents | Predatory Student Lending

Hi @Dmcginnis I am happy to get on the phone and help you further if you need. I will send you a private message to set up a call.

I have a told rare case. I do not qualify for loan forgiveness even though I work in public service (CM). I was mistakenly put on income based for 2 years…GL reported I should have never been. Because I consolodated before 2001 I am not eligible for any income based or forgiveness. I was told I could go back to school and then reconsolodate. I have been fighting this for a year. Any suggestions?

you can always review the Defense to Repayment (aka Borrower Defense) rules and see if you can dispute your loans.

Can I do this because of the consolodation that I was placed in does not allow me to do the IBR or loan forgiveness program?

What is the loan consolidation?

I’m a little bit confused by your situation. Income based repayment is one of the qualifying repayment plans for PSLF. As far as I know the date you consolidated a loan doesn’t factor into PSLF (but I could be mistaken, it is all so confusing!)

If you want to DM me we could schedule a time to call Great Lakes together and I could get more detailed information about what is going on. I can’t make you any promises, but hopefully we can better understand the situation and identify what your options are.

In the meantime, we need to organize to win real deep structural change. Organizing to win College For All

Join the debt strike and help us spread the strike! 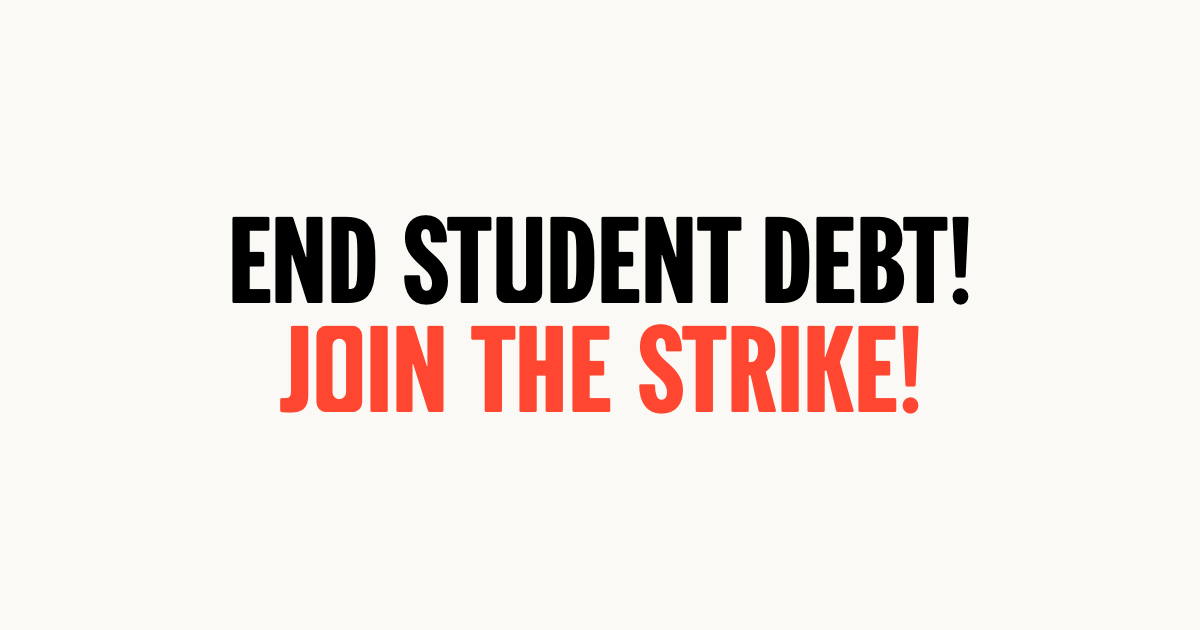 They called it a Plus consoladation, my son attended school for short term. He is disabled and has been since 16. He attended a Tech school at 17.

@Treas I am happy to get on the phone and talk through your situation. I will send you a direct message.