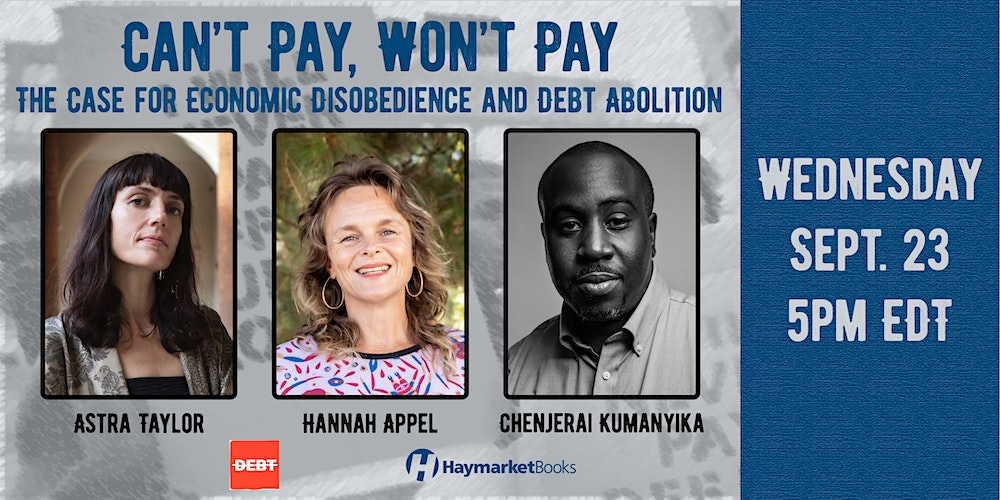 Astra Taylor, Hannah Appel and Chenjerai Kumanyika discuss the urgent new book: Can’t Pay, Won’t Pay: The Case for Economic Disobedience and Debt Abolition by the Debt Collective. The book is a powerful guide to action for people in debt.

Register through Eventbrite to receive a link to the video conference on the day of the event. This event will also be recorded and have live captioning.

Debtors have been mocked, scolded and lied to for decades. We have been told that it is perfectly normal to go into debt to get medical care, to go to school, or even to pay for our own incarceration. We’ve been told there is no way to change an economy that pushes the majority of people into debt while a small minority hoard wealth and power.

The coronavirus pandemic has revealed that mass indebtedness and extreme inequality are a political choice. In the early days of the crisis, elected officials drew up plans to spend trillions of dollars. The only question was: where would the money go and who would benefit from the bailout?

The truth is that there has never been a lack of money for things like housing, education and health care. Millions of people never needed to be forced into debt for those things in the first place.

Armed with this knowledge, a militant debtors movement has the potential to rewrite the contract and assure that no one has to mortgage their future to survive.

Debtors of the World Must Unite.

As isolated individuals, debtors have little influence. But as a bloc, we can leverage our debts and devise new tactics to challenge the corporate creditor class and help win reparative, universal public goods.

Individually, our debts overwhelm us. But together, our debts can make us powerful.

Astra Taylor is a documentary filmmaker, writer, and political organizer. She is the director, most recently, of “What Is Democracy?” and the author of Democracy May Not Exist, but We’ll Miss It When It’s Gone and the American Book Award winning The People’s Platform: Taking Back Power and Culture in the Digital Age. She is co-founder of the Debt Collective, a union for debtors, and contributed the foreword to the group’s new book, Can’t Pay, Won’t Pay: The Case for Economic Disobedience and Debt Abolition.

Hannah Appel is a Professor of Anthropology and Global Studies at UCLA and a political organizer. She is the author, most recently, of The Licit Life of Capitalism: US Oil in Equatorial Guinea, and serves as the Associate Director of the UCLA Luskin Institute on Inequality and Democracy, where she leads the Future of Finance research stream. She is co-founder of the Debt Collective, a union for debtors, and a writers bloc member for Can’t Pay, Won’t Pay: The Case for Economic Disobedience and Debt Abolition.

Chenjerai Kumanyika is an assistant professor in the Department of Journalism and Media at Rutgers University who also commits acts of podcasting and organizing. His research and teaching focus on power, race , and promotional culture in the cultural and creative industries. In addition to being a proud Moth storyteller, Chenjerai Co-created and Co-hosted Gimlet Media’s Peabody award-winning Uncivil podcast and co-hosts on Scene on Radio’s widely influential seasons on “Seeing White,” and the history of American democracy. His writing appears in a variety of scholarly and journalistic outlets. Chenjerai organizes with 215 People’s Alliance, the Media, Inequality, & Change Center, Philadelphia Debt Collective and continues to serve on Street Poets’ board.

This event is sponsored by Haymarket Books and the Debt Collective.

While all of our events are freely available, we ask that those who are able make a solidarity donation in support of our continuing to do our important organizing and publishing work.