A Message from an Anonymous Debtor

Today I received a desperate message about student debt cancellation from a stranger. With permission, I shared her message anonymously on my website. I feel it is a very strong message and would resonate with many people here. 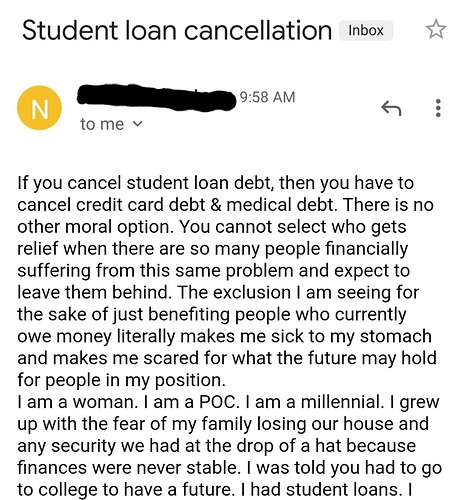 Message from an Anonymous Debtor - DebtRevolution.org

This person paid off her student loans, but she still has credit card and medical debt. She is struggling with her debt. She makes the compelling argument that we shouldn’t cancel student loans without also cancelling medical and credit card debt. She’s not arguing against debt cancellation, but she is so worried that she will be excluded and forgotten and left out. I felt obliged to share her message.

I think her testimony makes the case for debtor solidarity so clear. Our fight for student debt cancellation is only the beginning, and we will keep fighting to end all oppressive debts.

I have encouraged her to check out the Debt Collective, and hoping she will join in on some meetings. One of my main takeaways was that she really just needed support and someone to listen to her story. The creditors want to divide us up based on what debts we have, who can pay, who can’t pay, and we need to resist that!

“If you cancel student loan debt, then you have to cancel credit card debt & medical debt. There is no other moral option. You cannot select who gets relief when there are so many people financially suffering from this same problem and expect to leave them behind. The exclusion I am seeing for the sake of just benefiting people who currently owe money literally makes me sick to my stomach and makes me scared for what the future may hold for people in my position.
I am a woman. I am a POC. I am a millennial. I grew up with the fear of my family losing our house and any security we had at the drop of a hat because finances were never stable. I was told you had to go to college to have a future. I had student loans. I didn’t pursue the career options others did because I couldn’t take on debt I felt I would be paying off my whole life. All these arguments and stats talking about the groups of people suffering the most include me – I fall into all those categories. And yet the current plan for relief excludes me, even though I fit into every described category as the people hit most by student loan debt.
…"

WRONG!!..She can negotiate medical and consumer debt or file for bankruptcy and have ZERO debt, but people with federal student loans cannot. HERE’s what people don’t understand…

Federal student loans are NOT subject to FCRA and consumer protection laws because the student loan industry was privatized and deregulated in 2005 and there is no private right to sue.

Borrowers can legally be misinformed, not given debt term disclosures and can be overcharged and have no legal recourse. Recently, they scrubbed the NSLDS and “lost” all debtor information over 10 years old INCLUDING ALL PAYMENTS. Now, we have to pay it all over again.

My school overcharged me by thousands and won’t correct it. I graduated in 2008 with $22,000 and paid $14,000 with 7 years to go. In January, they lost my data in a transfer including my payments and put my account into forbearance. Now I owe $62,000 and have to pay 25 more years. Will they correct their mistake?..NO.

They’re intentionally losing qualified payments on Public and Military Service Forgiveness and only 1% ever qualify because they won’t tell you if your employer is one they’ll accept until you apply for discharge…Sorry, that’s not a qualified employer.

A soldier applied for an interest rate reduction under the SRA and they doubled his rate and some borrowers are now paying up to 50%…Yes! 50% interest rates making a $14,000 loan $400,000. I’ve seen complaints were a 10 year old $32,000 loan ballooned to almost a million dollars.

Disability discharge?..Ask this disabled person…No. People have paid on their loans for 40 years and the balance remains the same. Offer to pay them in full…Nope. One guy sold his house and offered to pay them in full and they wouldn’t take it. They won’t let us pay them off…Ever.

Even those who managed to pay theirs off in the past are having their loans re-instated in full and those who’ve never had a student loan because they never went to college are being stuck with loans and forced to pay them.

This prevents us from being in professional employment due to poor credit, inability to buy a home, car, get a professional or business license and those in the military are denied promotions and like anyone else, it can get you fired.

What’s worse? Medical and consumer debt won’t prevent you from receiving Social Security retirement and Medicare, but defaulting on a student loan will cost you those privileges…Inheritance? They’ll take that, too.

People who think all students who attended these for profit colleges are getting a blanket discharge are mistaken. That’s not happening as people are now discovering. You’re not ever getting out of a student loan and it’s the mechanism to keep you in poverty because we are the human capital that’s backing the U.S. dollar.